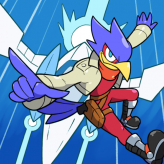 The Sacrifices We Make

By That Ain't Falco, November 16, 2015 in Starfox Fanfiction