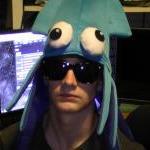 How did you get into Starfox?

By CommanderRed, March 20, 2016 in General Starfox