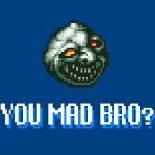 So what if Star Fox Assault's English briefings sucked less?